Like many of his audio engineer clients, Analog Prints’ Iulianelli likes letting the constraints of an assignment play a positive role, feeding here into his minimalist artistic philosophy.

“When it comes to most things, mostly art and music, I am a big fan of letting my limitations guide the outcome,” the Detroit-based artist says. “Screen printing is an old school way of doing things with some inherent limitations. Most of my prints are hand-screened by my friend Brent Mosser: Each color requires its own screen and adds cost and labor to the final product so you’ll usually only see 1-4 colors on my screen prints, and I think that gives them their style. However, I pick up inspiration from all over and it always finds its way into whatever I’m working on.”

His visual approach dovetails perfectly with depicting audio hardware. “When I am drawing all these knobs, tubes, and wires, I feel that I’m playing in a space that fits somewhere between a gear photographer and a gear builder,” he explains. “I think the art brings the beauty of the gear into a different dimension and holds the viewer’s attention longer than a photograph for some reason, but I am not sure why.”

A recent favorite drawn by Scott Iulianelli : The famed Fairchild 670 in pen. 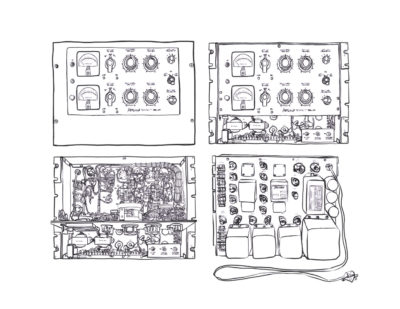 Iulianelli was particularly pleased to see the Audio Evidence Mobile commission come to Analog Prints. “Rob came to me with a vague idea of what he was picturing in his head, which was his main desk loaded with gear and his beautiful van—he also mentioned ‘blueprint’ somewhere along the way. I started out with a ruler and just started making vertical and horizontal lines until the proportions were right for the van, then did the same for the desk.

“My dad was a builder and also a visual thinker so sketching ideas like this was pretty familiar and reminded me of something he would draw on a napkin with a blue ink pen at our neighborhood Big Boy diner when I was a kid.”

Interestingly, the soundtrack Iulianelli plays in his art studio is mostly non-musical. “I usually listen to books while I draw,” he says. “My recent listens were; Biocentrism, Carl Jung’s Psychology and Alchemy, and The Kybalion. When I have been enjoying music lately, it’s been Run the Jewels, Black Sabbath, William Onyeabor, Fela Kuti, and LCD Sound System.